I love street art, public art, graffiti; whatever you want to call it, I love that dingy dank walls can be brightened up with huge and colourful art and sculpture can simply be littered around public spaces for people to enjoy (or ignore) as they see fit.

I had heard on the grapevine that Beeston was a good place to view some public art, so off we headed to see what is on offer. It didn’t take long to track some down.

We found this in a small car park off Station Road. You can’t tell me that a blank, boring concrete wall would look better than this.

On the side of the Star Inn in Middle Street we then discovered this blast from the past.

Anyone remember the TV series Boon? Well apparently a fair amount of outdoor filming for the series was done in and around Beeston. Who knew? In fact series four to seven were filmed at the studios in Nottingham. The crime drama starred Michael Elphick and Neil Morrissey in his first major role. I love this tribute to them – and I’ve still got the Hi Ho Silver theme tune stuck in my head.

But if we are talking about tributes to stars, then just take a little look at this. 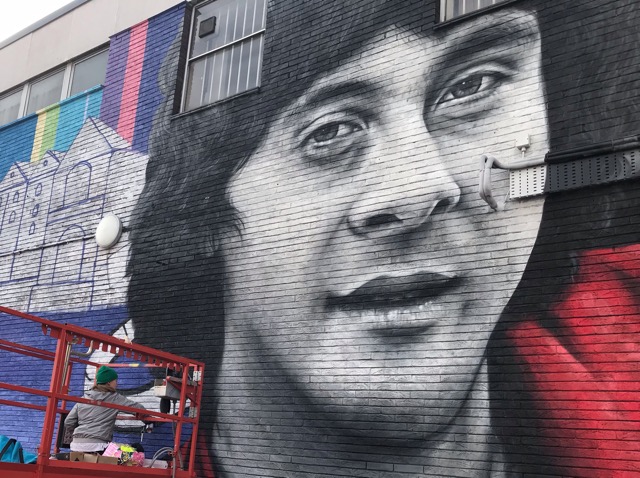 This is one of a triptych currently being painted by the French-born, London-based street artist Zabou and it is nothing short of magnificent. She is spraying this freehand and it is absolutely incredible to see her working.

She was commissioned by Broxtowe Borough Council (kudos to the councillors) with money from an art fund of the Henry Boot Corporation and it has been organised by the Beeston & District Civic Society and a Facebook Group – Beeston Street Art Group.

Richard Beckinsale was born in Chilwell. He’s the middle panel of the three. According to a report on Nottinghamshire Live, daughter actress Kate Beckinsale is absolutely thrilled with the tribute.

The first famous face on the wall in Station Road is this one. 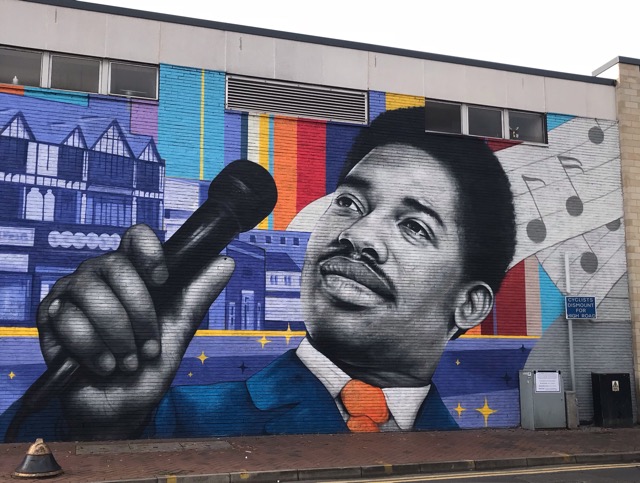 Edwin Starr wasn’t born anywhere near Nottingham, in fact he was born in Nashville, Tennessee and became a worldwide star out of the Motown stable in the 60s and 70s. But he relocated to the UK, living in Chilwell. He even collaborated with the Style Council in support of the miners. He died in Chilwell of a heart attack in 2003 and is buried at Wilford Hill.

The final image of the three will be of fashion designer Sir Paul Smith who was born in Beeston and first set up shop in Nottingham.

On Wednesday when we had a quick chat to her, Zabou estimated the work would take her eight days to complete. I’m going to head back when they’re done so I can see all three in all their glory. 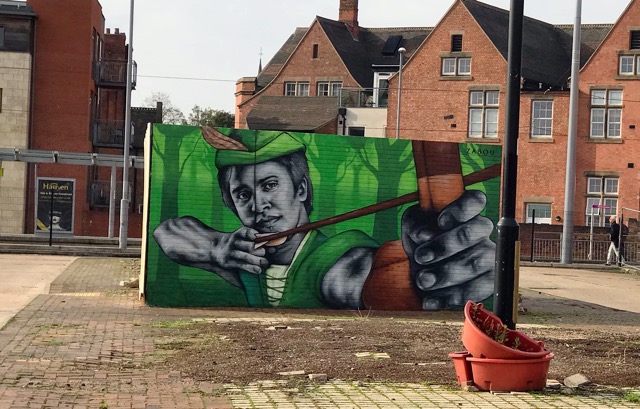 I believe Zabou is also responsible for this in a vacant lot a little further down Station Road and backing on to the tram stop. Her work really is amazing and if you want to know more about it, check it out here.

But it’s not just street art that features in Beeston, there are some public sculptures too.

I love this guy.

And here’s Phill striking a pose with him. You can find him (the sculpture, not Phill) sat in the pedestrianised High Road, right near this one.

If you are wondering why there is a random beehive in Beeston High Road, then Wiki has this to say: “The earliest recorded name given to the area was Bestune. This is now generally thought to be derived from “bees” = an abundance of honey bees and “tune” a farmstead settlement.” So now you know.

Off the High Road you can find this – more traditional street art – and this.

Finally, at least for this trip, I wanted to checkout some transfer street art that Phill and I saw being installed in the summer – but we were in the car going somewhere and couldn’t stop.

That’s a Canary Girl working on munitions during the First World War. I am assuming this piece commemorates the 100th anniversary of the Chilwell Munitions Factory explosion that happened on July 1 1918.

The munitions factory was one of the most proficient in the country, with the Canary Girls churning out a huge number of bombs etc. On July 1918, an enormous explosion tore through the factury, killing more than 130 people. At the time, the accident – the single explosion killing the most people in the UK – was hushed up and many of the victims buried in a mass grave at St Mary’s church nearby.

Currently, I cannot seem to find out who created the art work above, but when I find out, I’ll let you know.

One thought on “Some pictures paint 1,000 words”