You’ve got to love those Victorians. They liked a nice stroll and created some lovely places where they could ‘take the air’. Funny isn’t it, how there are some amazing green spaces in the middle of the most built-up areas. Sometimes cities do green spaces extremely well.

Nottingham has plenty of green spaces – in fact, I’m pretty sure I read somewhere that it has the largest number of Green Flag green spaces outside London (or something like that). The oldest is the Arboretum, just a lovely place to got for a little perambulation.

Nottingham Arboretum is the city’s oldest public park and is just a short walk from the city centre – or you can hop on a tram – but that’s a little idle, so I walked.

The Arboretum covers 17 acres and was opened in 1852 in front of an estimated crowd of 30,000 people. Designed and laid out by one Samuel Curtis, botanist of the time, it was originally planted with more than 1,000 specimens of trees and shrubs. Sadly, one thing the Victorians weren’t quite so successful at was decent air quality and many of the original plants suffocated to death due to the industrial smog.

The park was laid out on the side of a hill, with wide sweeping lawns, winding paths, an ornamental pond, an aviary and expansive flower beds. It is said it was the inspiration for Neverland in JM Barrie’s Peter Pan (JM Barrie lived and worked here for a time). 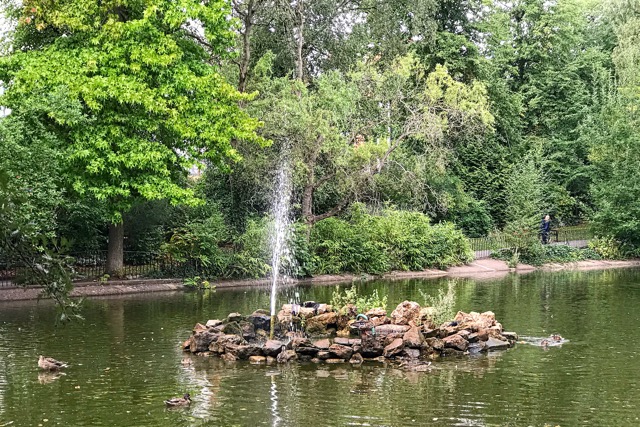 The pond has a brick base. It sits next to a number of small aviaries. There are public toilets here – all good parks should have those – and dotted about the park are statues of some of the town’s great and good. 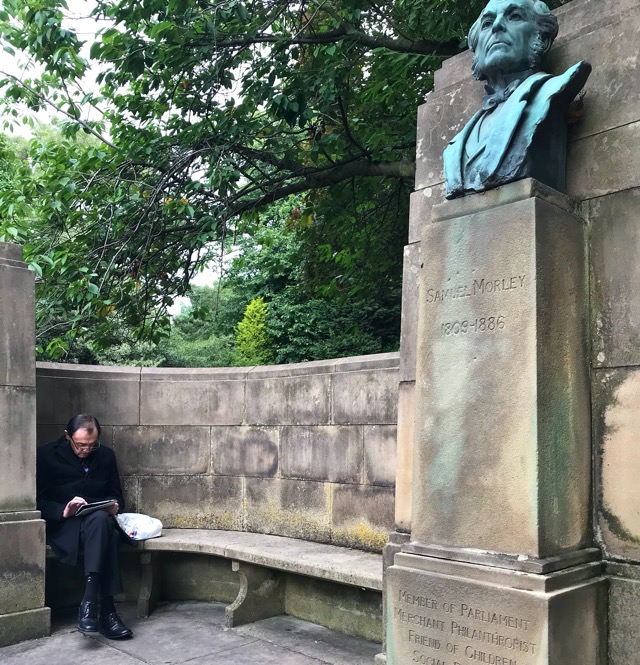 This is Samuel Morley (top right, not bottom left). He was an MP and businessman. He made stockings. Morley founded the city’s first children’s library, introduced old aged pensions for his workers and was a huge proponent of universal suffrage – a man with vision, obviously.

Nottingham City Council looks after the Arboretum, and does it very well. Trees have been replanted and there are now around 800 specimens from all over the world. You can see a mop head maple from Belgium, a blue atlas cedar from North Africa, an Armenian hawthorn or a Chinese pagoda tree. In fact, if you’re really interested, download the tree trail from the Visit Nottinghamshire website and go and see these amazing trees for yourself.

You can also download a heritage trail map from the same place that will guide you on a leisurely stroll around a number of points of interest in the Arboretum.

This is the Chinese Bell Tower that was built in 1862. It used to house a bell looted from a temple in Canton during the Opium Wars. The original bell is now in the regimental museum of whichever regiment stole it in the first place. The bell in the tower was replaced with a replica. Two of the guns are fakes too. Well, actually they are not pretending to be anything that they aren’t, they were made in a Nottingham foundry to add balance to the bell tower monument and stand alongside two originals from the Crimean War.

You can wander in this peace and tranquility for ages and, because of the twists and turns of the paths and the planting beds, it can seem as though you have the place to yourself, though there may be many people there.

Often it’s some dog walkers, families out for a stroll or people sitting in the sunshine reading.

Sometimes, though, the Arboretum plays hosts to large events. This photo is from the Pagan Festival Phill and I went to a couple of weeks ago. Tomorrow (Sunday) we’re heading there for the culmination of Nottingham’s 30th anniversary Mela, which I am really looking forward to. 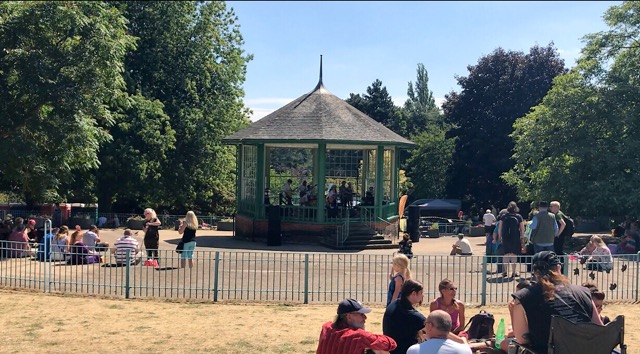 Good use is made of the bandstand at these events, and also for the Music in the Park season that has seen bands from all over the area perform there. The Bandstand was once located in Nottingham Castle gardens but was moved to the Arboretum in the 1880s. It is a Grade II listed structure.

Also with Grade II listed status are the Waverley Lodge and the entrance gate to Waverley Street.

The lodge was once the home of the head gardener. Now it houses The Arboretum Café. I went, I tasted, I reviewed – and you can read that here. (For those of you who can’t be bothered with that, I liked it).

You can also read, on the plaques above the bay window at the front, the names of the venerable gentlemen who came up with the idea of the Arboretum and who brought it to fruition. We owe them a debt of thanks. It was created to be ‘a place of education and recreation for the benefit of the residents of Nottingham’ and more than 165 years since it opened its gates, that is precisely what it remains.