Earth mothers, goddesses, witches, shaman, wizards, mystics and musicians: what an eclectic group of people gathered at the Arboretum in Nottingham today for Pagan Pride 2018.

I had been promised unicorn dressage – I mean, seriously, how could I resist? – but in the event it was just too hot for me so we didn’t stay to watch the prancing unicorns.

You want to know what was going on? Well here’s a quick taster.

The Arboretum is a great venue for something like this. There is plenty of open space, plenty of shade from the trees, a great bandstand and lots of almost separate areas. 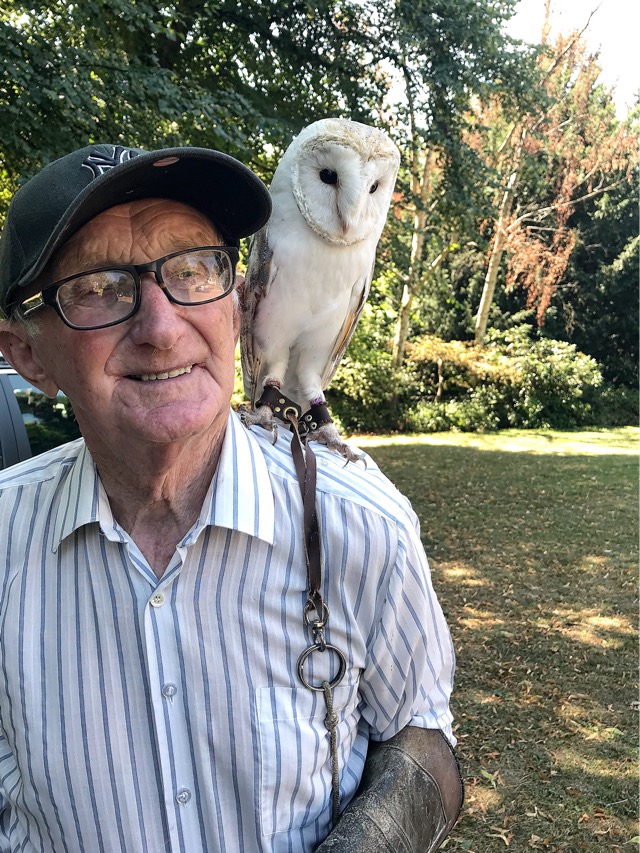 We met Frank first. He’s a bit of a local legend and can often be seen wandering around events in the city centre. That’s Kim on his shoulder. Kim is a nine-year-old barn owl that Frank has owned since she was a chick of just 13 weeks. She’s very tame and let me stroke her.

The couple pictured at the top of the post were lovely and kindly let me take their photograph. They looked fabulous, as did many in the large throng of attendees.

Pagan Pride is a celebration of the Pagan community that comprises dance, music, workshops, food, drink, talks, crafts, storytelling and stalls. It’s held annually on the first Sunday of August. 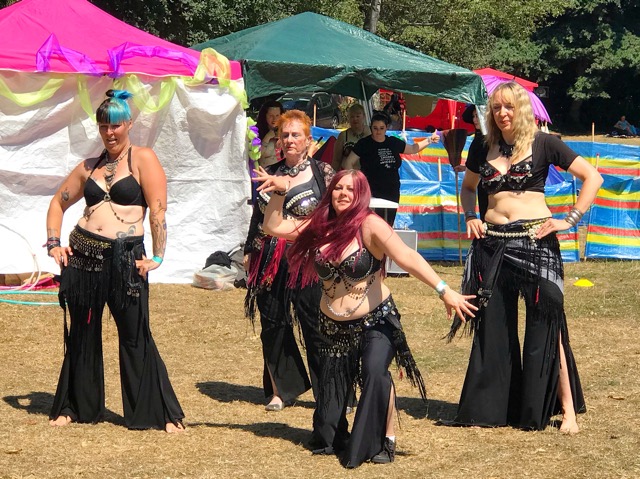 It’s organised by the Nottingham Pagan Network but there were groups and individuals brandishing banners or wearing T-shirts from all over the place – I spotted Yorkshire, Lincoln and Coventry. 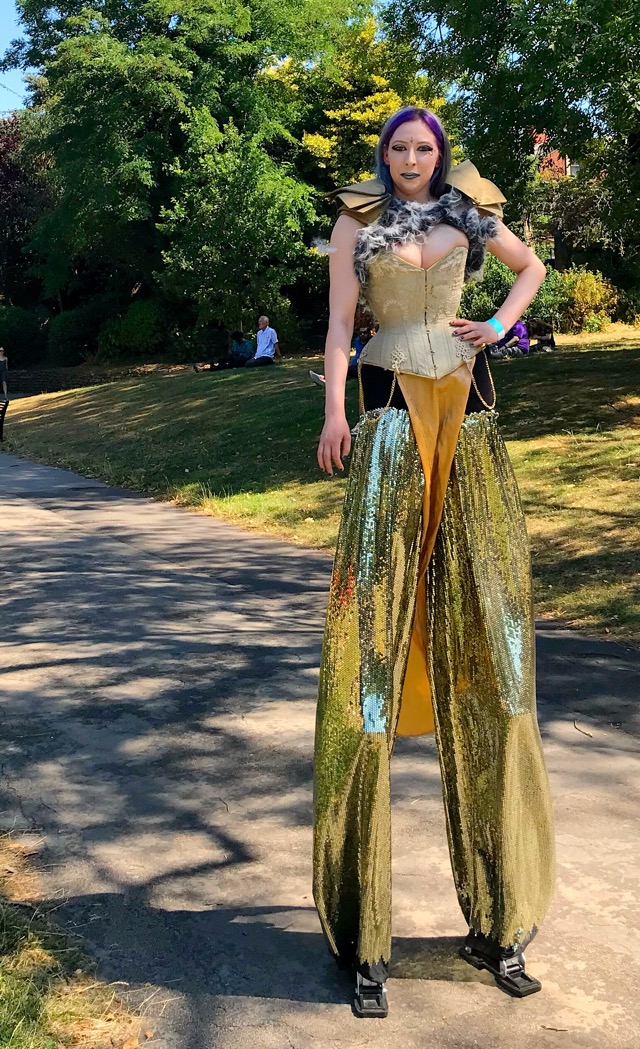 I don’t know whether I was more impressed at this lovely lady’s ability to walk on these very high stilts or by the fact that she could still breathe when her waist was so, so restricted in that spectacular bodice. She looked amazing.

As did this guy, who we later saw taking part in a storytelling performance. He must have been unbelievably warm in all that though.

The music on the bandstand was great, some was folksy, some was country with covers of the Dixie Chicks, Gretchen Wilson and even Keith Urban – right up my street. And everywhere I looked there were people with flowers in their hair. 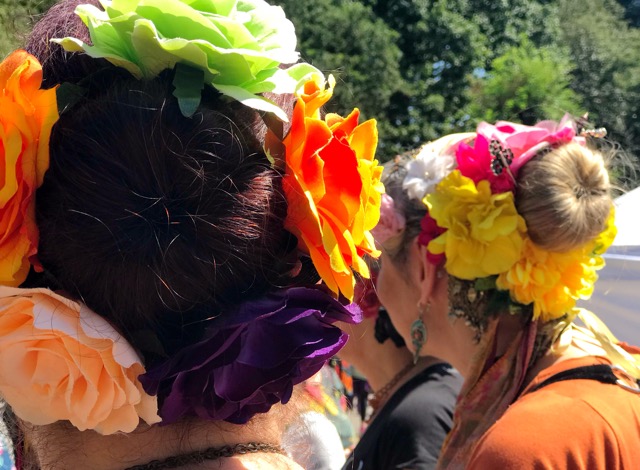 It was the most relaxed and chilled festival I think I’ve ever attended.

We spent quite a lot of time just sitting in the shade of the trees listening to the music, people watching and sipping on cold drinks – Castle Rock brewery were on hand selling their wares. I was tempted to buy Phill a drinking horn. We weren’t sure how you would balance it if you wanted to put it down though.

As for me, I really fancy one of these colourful parasols but I couldn’t find one. I think I know where I might obtain one though. 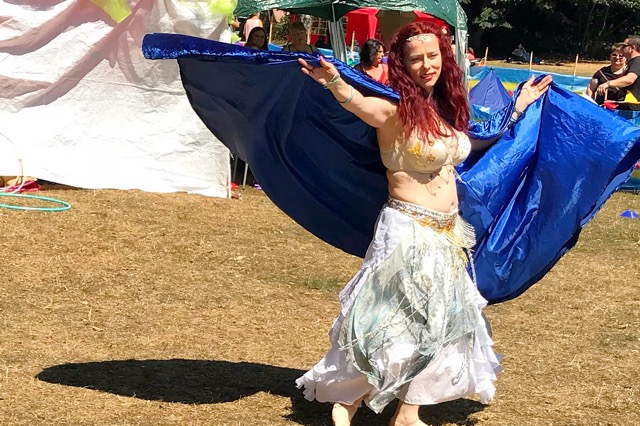 I don’t know very much about Paganism but there was plenty of information on offer. An Introduction to Paganism leaflet said this: “Many modern Pagans see the celebration of nature as representative of the divine and attune themselves intimately to the natural world and it’s seasonal cycles for what they see as the spiritual benefit and advancement of all.” 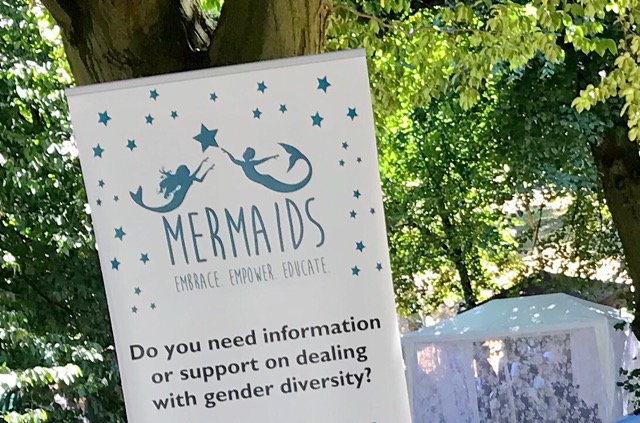 Last week I went to Nottingham Pride, this week Pagan Pride. Both events just had the most relaxed vibe and this attitude that it doesn’t matter who you are or who you want to be, you are accepted.

And that’s just the way it should be, isn’t it?