Nottingham is a UNESCO City of Literature. It has been since December 2015. It isn’t the only one; Barcelona, Bucheon (South Korea – I had to look that up), Dunedin, Edinburgh, Granada, Heidelberg, Krakow, Lillehammer, Ljubljana, Lviv, Manchester, Melbourne, Obidos, Reykjavik, Tartu, Ulyanovsk (that’s in Russia – I googled that too but I probaby could have guessed) and Utrecht are Cities of Literature too.

This isn’t a limited time thing, it’s a permanent accreditation given to cities that have a strong literary heritage. In the case of Nottingham, Byron, DH Lawrence and Alan Sillitoe are among the well-known and much-loved writers who helped prove the city’s literary worth – but there are many, many more.

Browsing the shelves at Five Leaves Bookshop the other day, I came across this thing of beauty. 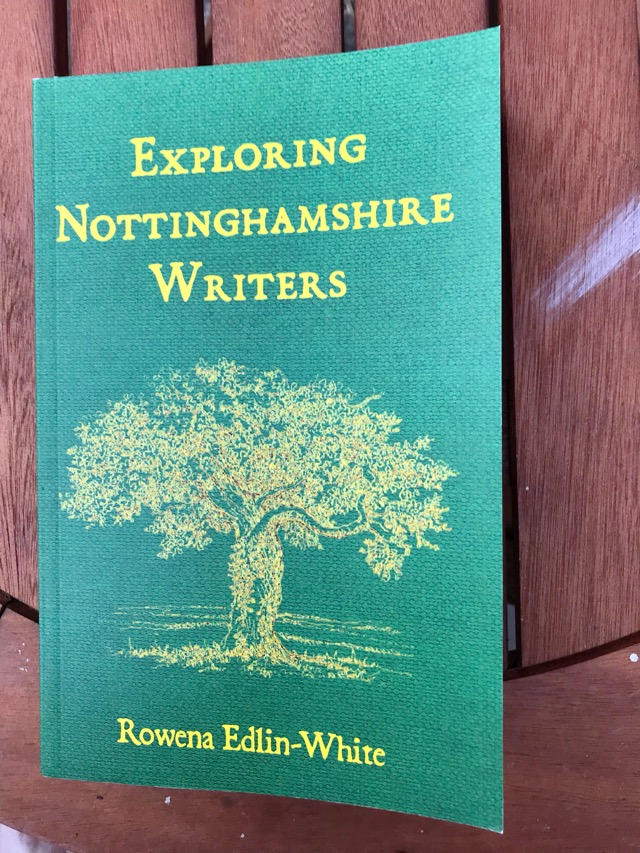 You may be able to tell it’s already well-thumbed. This book is an A-Z of some (not all – read the book if you want to know why) of the most eminent writers that have a connection to Nottingham. It starts with Ruth Adam, 1907-1977 – no, I’d never heard of her either – and ends with Gregory Woods, born 1953. In between there are authors I’ve heard of and authors I haven’t… and now I want to read all of them!

Some have only a fleeting connection to the city – JM Barrie and Graham Greene for example. Those I think I shall leave until last, partly because of the slightly tenuous link and partly because I’ve read them quite extensively before.

So I thought I’d start with the books pictured at the top of this post. I read Jon McGregor’s Reservoir 13 relatively recently and loved it so I am looking forward to If Nobody Speaks of Remarkable Things. I am ashamed to say I have never read Alan Sillitoe’s Saturday Night and Sunday Morning. This year marks the 60th anniversary of its publication and on the front cover of this edition is a quote from a review in the Daily Telegraph which says: “That rarest of all finds: a genuine, no-punches-pulled, unromanticised working-class novel.”

I shall review them when I’m done.

In addition to that reading list which, let’s face it, is going to keep me going for a while, the Cities of Literature have a summer reading list and each city has nominated one book. Nottingham’s choice is Words Best Sung by Lee Stuart Evans, so that is likely to be next up on my reading list. I also quite fancy The Bookshop of the Broken Hearted by Robert Hillman (Melbourne’s choice) and Tartu’s nomination Walker on Water which is described as ‘a collection of poetry and prose combining surreal and fantastical motifs with modern realities’. I am also, coincidentally, mid-way through The Other Mrs Walker by Mary Paulson-Ellis, which is the recommendation from Edinburgh.

The only problem I can see is getting hold of some of these works. I love Waterstones in Nottingham, but its selection of books by local authors appears to be umm, limited (and I’m being polite here). Sort it out please.

Now you – ok I – can’t confine myself to fiction or, in fact, limit myself to one book at a time, so I popped in to see Alex at Ideas on Paper yesterday and came out with these. 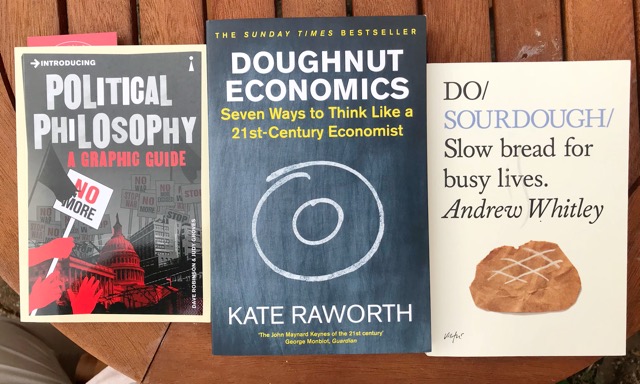 The graphic guide to Political Philosophy is because I don’t know nearly enough about politics, the Do/ Sourdough is because my beautiful new oven is just crying out to have bread baking in it and Doughnut Economics was Alex’s suggestion because I was telling him I’d found the chapter on capitalism in Sapiens: A Brief History of Humankind by Yuval Noah Harari (which Alex had also recommended) very interesting.

As part of Nottingham’s status as a City of Literature, it has a Young Poet Laureate and for 2017/18 that person is Georgina Wilding, who is also a founding editor of Mud Press. I love that her work is displayed in the city, by the wall of heroes in Hockley. 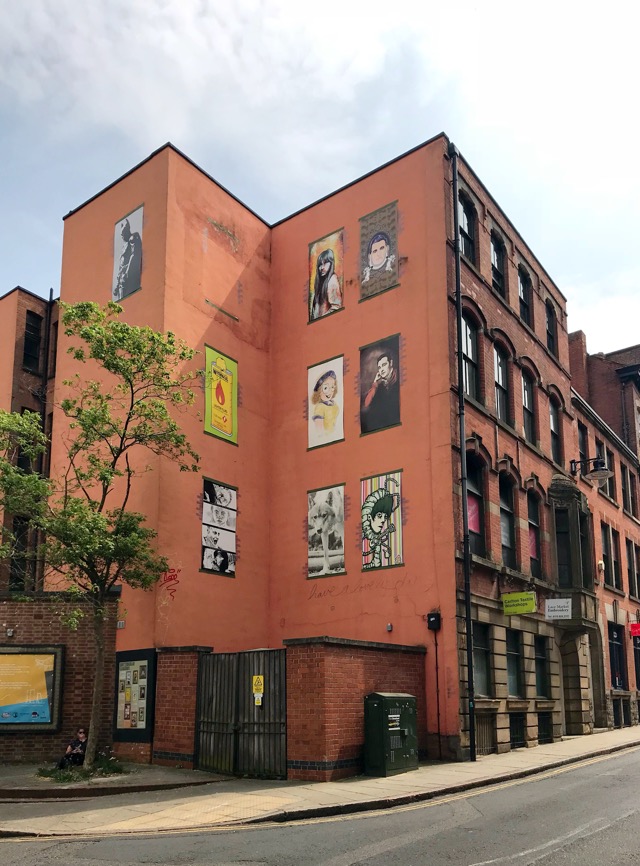 You can get a glimpse of the installation in the bottom left of the photo above… but here’s a close-up. 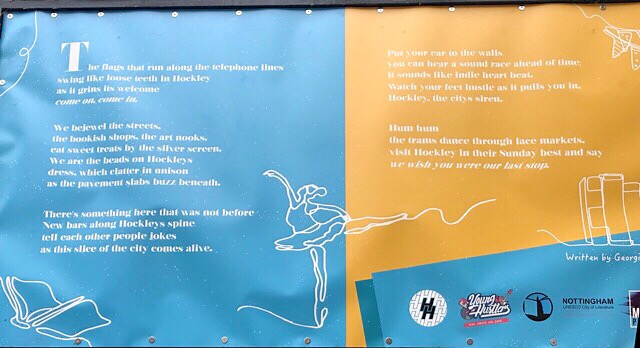 What an amazing idea to make poetry more accessible to a wider range of people. I hope we see some more of this across the city. I shall also make it a mission to read more of her work.

I am excited to see what else is planned by Nottingham City of Literature and am loving being in a city that feels as though it has a cultural revolution going on.

One of the other things on my extremely long to do list is investigate this. 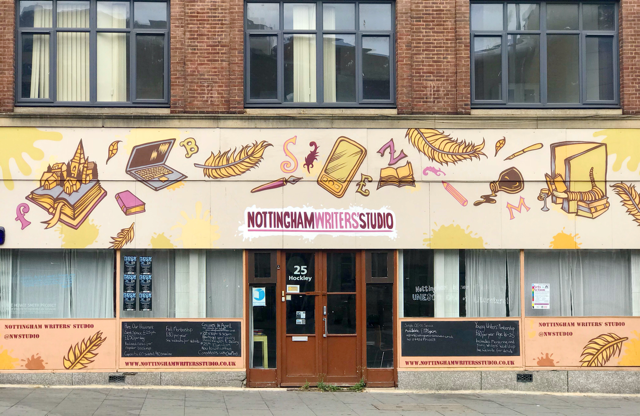 This looks to me like a very good place to be and I really want to find out more.

Who knows, maybe that lifelong dream of writing a novel may become a reality. I certainly feel I’m in the right place to try and make that happen.

2 thoughts on “The fire is lit(erature)”