I’ve finished it! I have completed the Hoodwinked Robin trail around Nottingham City Centre. And, you know what? I’m going to prove it to you.

I’ve had great fun, walked miles, seen plenty of other people doing the same thing and I’ve discovered some parts of the city I’ve never seen before. I’ve also wandered around taking notes so I have plenty of ammunition for future blog posts (as if I needed any).

So I’m going to give you the Hoodwinked tour, not in the order they come on the map, but in the random order I did them in, which happened to be a tour in three parts.

I started here at Nottingham Castle by the Robin Hood statue.

Trust me to start with the last one! On the map this is numero 33, ‘Ay up me duck’ by Karen Holbourn, Claire Thompson and Anna Roberts and sponsored by Browne Jacobson. I like this one very much, it’s in my top five. There’s another one at the castle but I failed to spot that one and moved on to…

Robin number 6, ‘A Bird in the Hand’ by Sue Guthrie, sponsored by Nottingham Hospice for which this Hoodwinked Trail is raising money. This is near the junction of Castle Gate and Lister Gate. My next stop was… 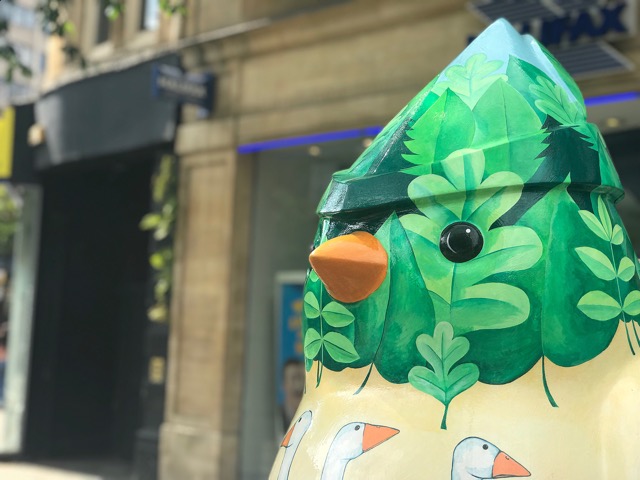 ‘Goose Fair, Goose Fowl’ by Cathy Simpson and sponsored by the Murphy Group. It’s Robin number 7 and it’s covered in geese. It’s at the bottom of Hounds Gate. I’ve never been to Goose Fair, I’m going to rectify that lapse this year.

Then I headed across Market Square and found Robin number 16, ‘Hands of Hope’ by Jess Kemp _ JAK in the Green and sponsored by ABSN, at the bottom of Long Row. If you’ve followed the trail yourself, or have any clue about the geography of Nottingham city centre, you will already have realised I am following a completely cock-eyed route that makes no sense to anyone apart from me.

Robin number 25 was next. This one’s called ‘Tigguo Cobauc’ and it’s all about the history of Nottingham. Be prepared for a story about that at a later date. Tigguo is outside the Theatre Royal, is designed by Lissie and sponsored by GF Tomlinson.

Just around the corner is Robin number 24.

‘Captain Jack Robin’ by Susan Webber this one’s great. He is sponsored by Yarn Bar and sits outside it.

Next up (and I’m still on day one here) was…

Robin number 23 outside the Cornerhouse, which sponsored it. I was unhappy that people had seen fit to litter ‘Max (Superhero on the Weekends)’ by Kid30. I felt he deserved better.

I followed a route down Forman Street to Trinity Square, where I came across the next two just yards apart. 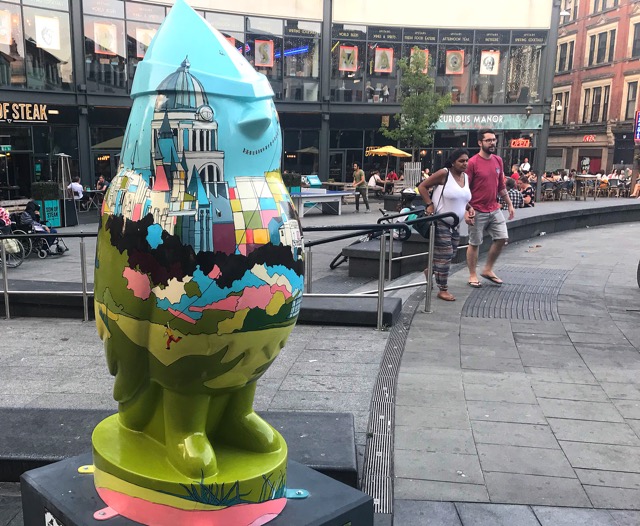 Meet Robin number 22, ‘Nottingham Cityscape’ by Jamie B Edwards and sponsored by ParkLives Nottingham and 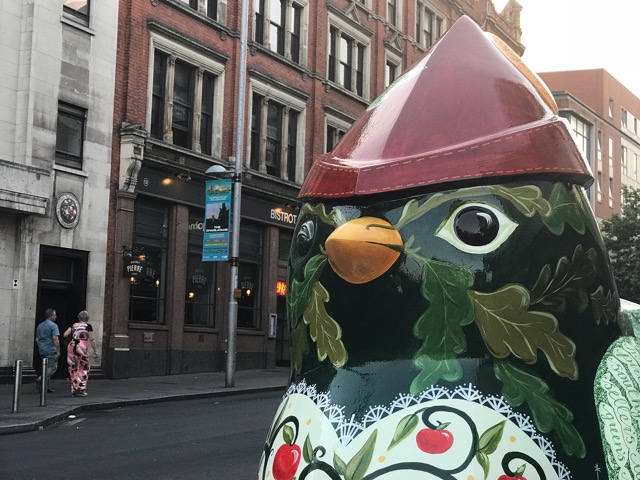 Robin number 18, ‘The Green Heart of the City’ by Curious? Nottingham and sponsored by Cavalry Design before crossing the road and heading to my last robin of the evening.

This is Robin number 17 in Lower Parliament Street and he also makes my top five by merit of the fact he is a Robin in a Hood. A proper Robin Hood. I like him lots. He’s called ‘Robin Hood’ (no surprises there) and was designed by Jodie Silverman and is sponsored by the Nottingham Building Society. And that was the end of day one (bored yet?).

Now I say I did the tour in three parts but I cheated slightly because there were three parts I walked and then I took a little detour in the car for this one.

This is Robin number 4, it’s another one by Sophia Edwards, Claire Thompson and Anna Roberts and it’s called ‘The City Ground Robin’, sponsored by Nottingham Forest and located at the City Ground, which just struck me as quite a long way to walk.

Day two (these weren’t consecutive by the way) began with getting off the bus at Tolhouse Hill and almost immediately running into Robin number 29.

This one’s called ‘Carnival Celebrations’ and is by Jess Kemp – JAK in the Green and sponsored by Gateley plc. It’s in Chapel Bar.

As is this beauty sponsored by the Nottingham Post and called ‘Read all about it Robin’. He was created by Ann Faircloth, Claire Thompson and Anna Roberts. He’s Robin number 28 on the map.

In Market Square I then found Robin number 26, ‘Saturday Night at the Fair’ by Erin Fleming and sponsored by the Mellors Group.

Across the other side of Market Square is

Robin number 27 by Kathleen Smith who has been sponsored by the Robin Hood Network and is called ‘Where’s Robin?’. Top five again for this one, the whole of Nottingham is on this Robin. 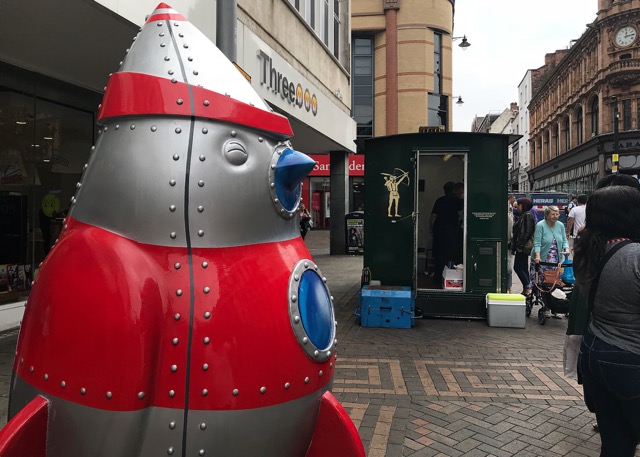 Sponsored by East Midlands Airport and designed by Deven Bhurke, Robin number 15 is called ‘Rocket Robin’ and can be found opposite The Exchange and Patisserie Valerie.

While robin number 14, ‘Roots of Boots Robin’, sponsored by Boots and designed by Julia Allum, is staring at the entrance of The Exchange at the back of the council house.

I thought I’d head out to Sneinton, so I headed past Robin number 11, ‘Stage Flight’. Claire Thompson and Anna Roberts were responsible for this one too – they have been very busy. This is sponsored by Nottingham Playhouse and is on the corner of Broad Street and Goose Gate.

I had a lot of fun watching a group of skateboarders at Sneinton Market Square.

Here I found ‘Wag Athlon’, aka Robin number 12. He is sponsored by Wild In Art – the organisation behind Hoodwinked 2018 – and designed by Nicola Mills.

I headed back to the Lace Market where outside St Mary’s Gate I found ‘Lacework’ by Danni Thompson aka Robin number 9. He is also sponsored by Wild in Art.

My final Robin of day two (stop breathing a sigh of relief!) was here.

Meet Robin number 8 at Weekday Cross. This one’s great because it features loads of famous Nottingham folk – what a mine of blog ideas this is. He’s called ‘What’s Notts?’, designed by Paul Atchison and sponsored by BBC Radio Nottingham. And so ends day two.

Because I had taken a circuitous route on days one and two of my search, day three was going to be a fill-in-the-gaps day so on Friday I started at the railway station. 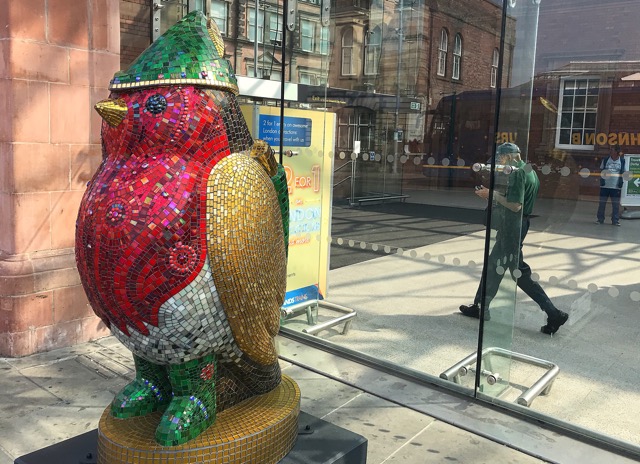 Here you go, Robin number 1 going by the name of ‘Royal Robin Redbreast’ and sponsored by Castle Rock Brewery. This lovely chap was designed by Julie Vernon.

Just around the corner on Station Street I discovered…

‘Robo Robin’ by Glen Brooks and sponsored by Capital One. He’s Robin number 3 and he makes my top five not only because he’s beautiful but also because the sign behind him says he’s in a first class city centre location.

He’s very close to Robin number 2 – ‘Judge Robin’ where I had to queue for several minutes to wait for a family of four children to stop climbing on him and go away before I could take a photo. The Judge was designed by Susan Webber, is sponsored by Eversheds Sutherland and should have sent those kids to jail.

Intu Broadmarsh was next where Robin number 5, ‘A City built on Wisdom’ was tucked away at the back. Designed by Adam Pekr, it is also sponsored by intu Broadmarsh.

When I began my Robin hunt at the Castle, 3,000 people were queued outside waiting to go and watch England in the World Cup on the big screen. That is my excuse for missing ‘The Sheriff of Nottingham’ outside the castle gates. Well I got him this time. He was designed by Jodie Silverman, sponsored by the Nottingham Castle Transformation Project and is number 32 on the map.

I got a bit hot and bothered trying to track down Robin number 31 – ‘The Major Oak’ by Donna Newman and sponsored by Hart’s Nottingham. It was lunchtime on Friday, sun beating down on me and I walked around in circles for a while before I found him in the courtyard at Park Row. 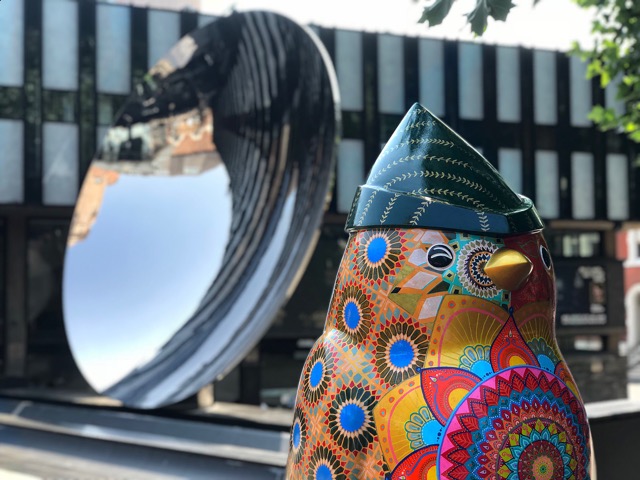 ‘Independence’ by Hannah Money and sponsored by Nottingham City Council, however, is the final one of my top five not only because it is also beautiful but also because I judged it to have the best location – outside Nottingham Playhouse and by the Sky Mirror (which I’d never seen before). I bought an elderflower cordial with lots of ice and sat at a table shaded by trees and watched the world go by. This is Robin number 30.

I was now on the final countdown.

There was a woman giving away free popcorn (I have no idea why) in the Victoria Centre Market right where I found Robin number 20 ‘R2 Tweet2’. Sponsored by Nottingham Markets, it was designed by Mik Richardson.

And the other one in the Victoria Centre is ‘Nottingham Forest’ by Kathleen Smith. 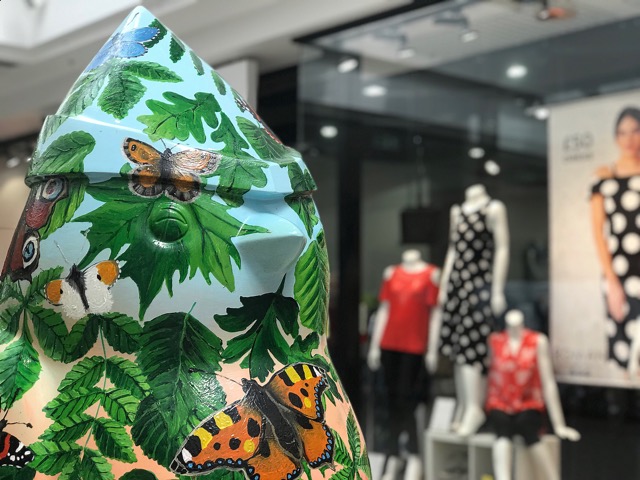 It is sponsored by intu Victoria Centre and is number 19. It’s upstairs behind Emmett’s Clock, which I was delighted to find because I didn’t know it had been relocated.

And so the journey ended.

My final Robin was Robin number 10 sponsored by Nottingham College. It’s called ‘Bobbin’ and was designed by Jemima Cholmondeley-Smith and it brought my Hoodwinked 2018 trail to an end.

Now finally here is my overall winner, which I chose because I think it captures the whole of Nottingham in one Robin. Congratulations ‘Where’s Robin’, I think you’re stunning.

4 thoughts on “Hoodwinked by some Rockin’ Robins”