I am very disappointed.

A couple of weeks ago I discovered there was a hidden Victorian Music Hall behind St James’s Street in Nottingham city centre. I had absolutely no idea it was there. Not only that, there were caves underneath the building that hosted wonderful-sounding events like gin tastings (yes please) and open mic poetry jams. It sounded fabulous.

I Googled it, as you do, and discovered that The Malt Cross was a pretty cool venue. The picture above is from its website. How amazing does that look? I knew I’d have to go and take a look and added it to my list of must-see things.

Then just a couple of days later this popped up on my Twitter feed.

Then last Thursday – July 19 – Phill came across a story on Nottinghamshire Live. The Malt Cross had closed. Staff had turned up for work the previous morning to find a notice on the door which basically said ‘We have closed, you might as well go home. Oh and by the way, you’re not getting paid’!

How awful is that? Those poor people turn up for their shift only to find they have no job and no wages. That’s not any way to treat people.

There was a lot of discussion on Twitter, mostly people sad about the demise of such an unusual venue.

Reading the discussions, it seems that Lottery funding paid for the refurbishment of this music hall that was built by one Charles Weldon. He received planning permission in 1877, having purchased the Malt Cross pub the previous year. The building was designed by architect Edwin Hill who had made the best possible use of natural light by installing a laminated wooden glass domed roof at the top and glass tiles between the floors.

The building is now owned by The Malt Cross Trust, a Christian charity that runs, among other things, Street Pastors – a team of volunteers roaming the streets of the city in the evenings taking care of those who need taking care of. The charity was given rather a lot of money from Lottery funding to refurbish the building.

The building also houses Handmade Nottingham, a community of craftworkers who  sell their wares from the premises and organise workshops and events. Handmade Nottingham is still open, for which I am glad because I wanted to go and find out what it is all about.

On Friday I saw the following statement on Twitter: 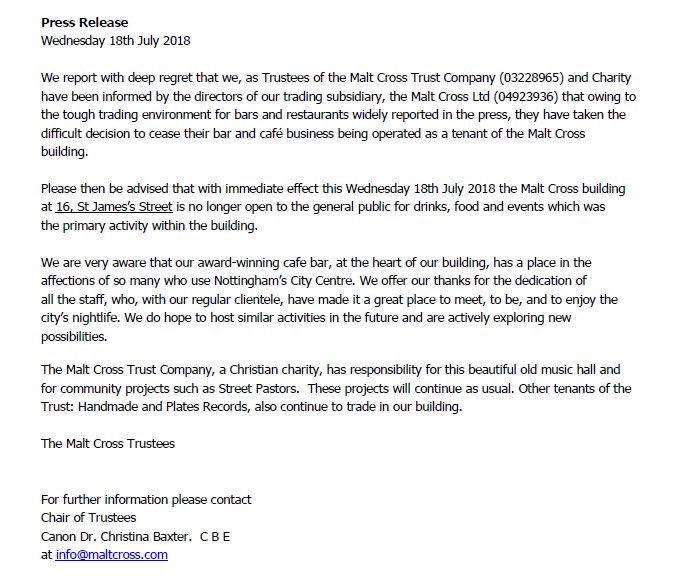 That’s not really acceptable is it? It’s a statement that tries to absolve the Trust from any responsibility, while stating that The Malt Cross Ltd, which ran the cafe bar and events, was in fact its own trading subsidiary.

Now there’s every possibility that we can get the £80 we paid for tickets to the cancelled music hall event back – purely because they were paid for on a credit card and we can make a claim under Chargeback rules – but the staff are unlikely to get the wages owed to them and they certainly aren’t going to get their jobs back! And that sucks, that really is no way to treat anyone, let alone your hard-working staff.

I live in hope that someone else will come along to run the premises and that one day I will finally get to see this beautiful music hall, and the caves underneath it.